A couple of weeks ago, Google announced that from 1 August 2011 they will be changing the way they support web browsers for their Google Apps products including Gmail. Their blog post gives a little more information:

For web applications to spring even farther ahead of traditional software, our teams need to make use of new capabilities available in modern browsers. For example, desktop notifications for Gmail and drag-and-drop file upload in Google Docs require advanced browsers that support HTML5. Older browsers just don’t have the chops to provide you with the same high-quality experience.

For this reason, soon Google Apps will only support modern browsers. Beginning August 1st, we’ll support the current and prior major release of Chrome, Firefox, Internet Explorer and Safari on a rolling basis. Each time a new version is released, we’ll begin supporting the update and stop supporting the third-oldest version.

As of August 1st, we will discontinue support for the following browsers and their predecessors: Firefox 3.5, Internet Explorer 7, and Safari 3. In these older browsers you may have trouble using certain features in Gmail, Google Calendar, Google Talk, Google Docs and Google Sites, and eventually these apps may stop working entirely.

This came at an interesting time for us as we were readying to launch our new website design. We’ve been forced to make decisions about which browser versions to support and which to ditch. Unlike Google, we’re still supporting Internet Explorer 7, though some subtle design elements may not work, but we too have the problem of not being able to take advantage of features in more modern browsers.

IE7 is five years old yet is still being used by over 20% of visitors to GO. Some of these will be machines on campus and colleagues are working to upgrade these but others are beyond our direct control.

We will however no longer support IE6. Use of this is around 2.5% yet to develop for it would consume a disproportionate amount of time. It’s also 10 years old and even Microsoft want rid of it!

More generally we’ve seen use of Internet Explorer drop by around 15% since January 2010 while Chrome is up by 10% and Safari up by 4%. Firefox and Opera have both maintained their position. 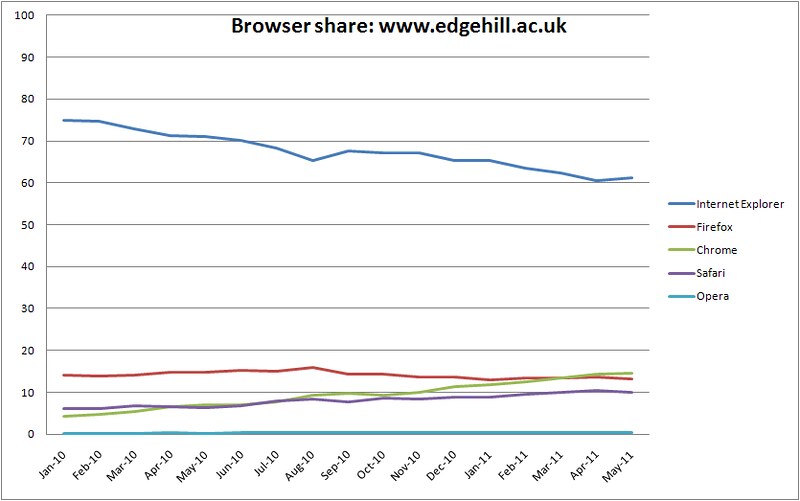 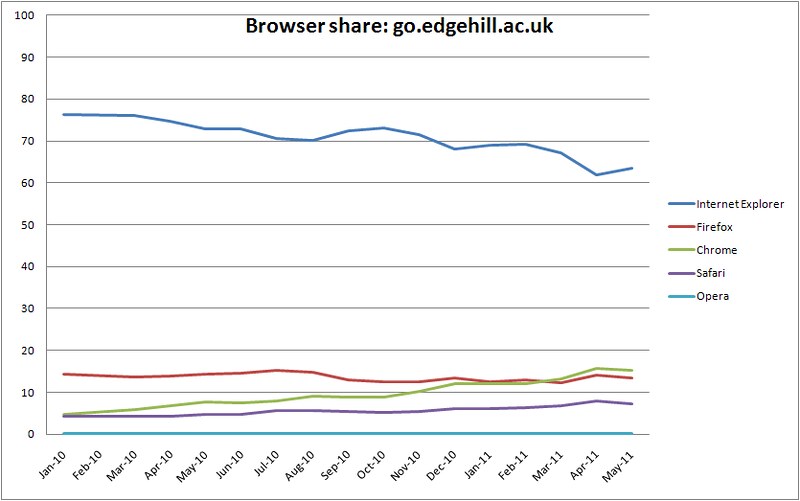 The adoption of modern browsers is important for the web to keep developing. Just as things start to go wrong if you don’t service or MOT your car, when using an out of date web browser, not everything will function as designed and there are potential security risks too. So I’d encourage everyone to make sure they’re running the latest version of a browser – then we can start to innovate rather than always struggling to cater for the lowest denominator.