The first suit I ever bought, back in 1986 as I prepared for my first suit-wearing job, was from a branch of Burtons. It took me 23 years to buy another one. My repeat purchase came about because I happened to watch an episode of British Style Genius on BBC2, in which there was talk of a new ‘heritage’ range of Burton suits based on old 1960s designs, using English cloth. These sounded like fun, and I looked in the Ormskirk shop a few times hoping to see them – but all they had were the usual young lager-drinkers’ leisure outfits and first-time-offender-court-appearance suits. (No offence intended to anyone who shops there 😉 ) Eventually I cracked and looked on the website, which did indeed have the ‘heritage’ stuff, but only as end-of-lines being sold off for small heritage-style amounts of money, £20 for a jacket and £10 for trousers. I took the risk of buying one, and luckily it fits reasonably well – a least as well as the suit sported by the patriarch of the PG Tips chimp family, in their Wall Street inspired yuppie-themed period in the 80s. It is a nice suit and I can’t imagine why they failed to sell them for the original price. It’s a curious hybrid of new and old, with handy extra iPhone size pockets, and an array of buttons inside the trousers to which braces might be attached, such as would have been familiar to men being demobbed from either World War. 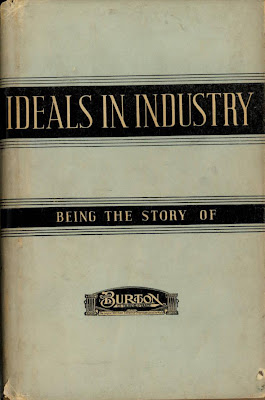 Having become a Burton fan, I couldn’t not buy Ideals in Industry: being the impressions of social students and visitors to the Montague Burton workshops (3rd ed, 1936) when I found it in a secondhand bookshop in Halesowen. The book, published by Burton themselves, is a highly self-congratulatory corporate history. This particular volume, number 20068, was presented to one P.B. Jenkins, a salesman at ‘branch 339’, as an ‘efficiency award’ in 1948. 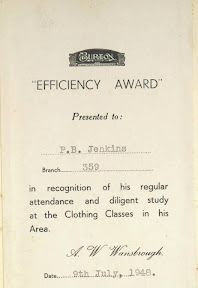 He would have read about the triumphs of his company, capitalism at its most benign: the ‘20,000 employees on payroll’ mentioned on the letterhead seem to have enjoyed light and airy canteens, social programmes and support provided by a company that believed ‘that a great business may have a heart as well as a counting house’. 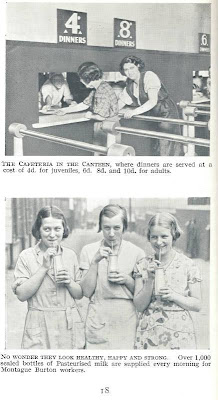 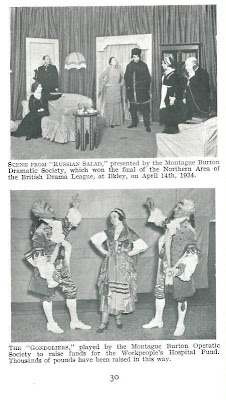 One of the ‘social students’ mentioned in the title, ‘Martha Steinitz, an eminent Student of Political Economy, a well known Labour Leader and Social Reformer’, observed that

Everything seemed to work so smoothly that one almost imagines the whole place is swinging fluently to the perfect rhythm of some popular tune: a picture of the most varied activity, a serious and yet bright spectacle, rhymthically arranged like a swaying dance, at the same time. ingenious and creating wealth like nature…

I’m not sure whether ‘wealth like nature’ flows into the counting house of the modern Burtons. I would however seuggest that, if they provided the kind of service they did back when Ideals in Industry was produced, they could be on to a winner. The formula used to be that fittings for tailor-made suits were taken in the branches, and the actual suits made in the ‘swinging’ environment of their giant workshops. This could appeal to a number of modern marketing concerns:
– customisation (everyone gets an individualised product)
– ease and speed of purchase (compared with going to real tailors)
– reduced miles (if they carried on making clothes in England from English cloth)
– concern for worker’s welfare; a Fair Trade vibe (if the factories and shops were paragons of health as depicted in Ideals, with ‘a course of sun-ray treatment for two shillings’)
I’d be first in line anyway – hoping for a loyalty bonus for buying three things from them in a quarter of a century, and as a downside becoming (even more) one of the people who, in the words of Joe Strummer, ‘wear Burton suits/turning rebellion into money’. 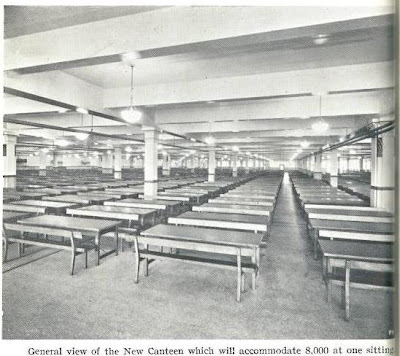 As a piece of corporate communication, the Ideals book seems naive and old-fashioned on the surface. But it has a lot of the same ingredients as its modern equivalents, such as Annual Reports: claims to a higher purpose and appeals to ethical and moral values (‘Less than forty years ago the old traditions prevailed and tailoring was a ‘sweated’ industry. Our satisfaction is to have broken with these traditions. The night has passed and the morning has come’); peacock-like showcasing of buildings and facilities; endorsements from third parties (in this case, visting royals and those ‘social students’); heritage (‘founded 1900’); scale of resources (‘£11000,000 CAPITAL’); claims to uniqueness; and an air of optimism in endless progress.

Maybe our next publication will remind readers that ‘efficiency may wear a smile and not a frown’. 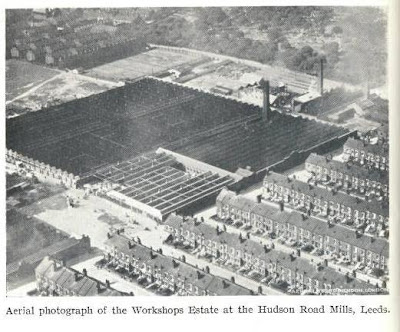