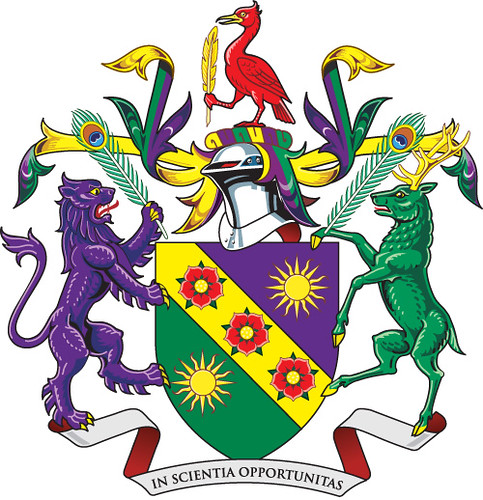 Introducing the new coat of arms, this article from the Autumn 2008 issue of Campus Link:

Edge Hill has recently unveiled a new coat of arms to mark the institution’s long tradition of higher education.

The heraldry tells the story of Edge Hill using the Red Rose of Lancashire and the Liver Bird, to reflext the University’s current location in Ormskirk, while looking back to the institution’s original location in Liverpool.

Edge Hill’s ideological origins are represented by the green and heliotrope (purple) of the sufragette movement and the use of gold, which is associated with generosity and elevation of the mind.

The coat or arms also include the Edge Hill motto – “In Scientia Opportunitas” – which translates as “In knowledge, opportunity”.

Supporting the shield are a lion, representing strength, bravery and magnanimity, and a stag, symbolising wisdom, regeneration, peace and harmony.