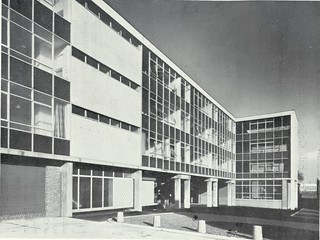 This photo of Edge Hill Secondary Modern School for Boys was published in The Crest, Edge Hill’s magazine, in 1959. The school was built on the site of the original college in Durning Road.

There were Primary and Secondary schools. The Girls’ Secondary Modern was the first to close, in 1973, when it amalgamated with Newsham Secondary into Fairfield Secondary Modern. The Head, Miss C E WATSON, transferred to Fairfield. When it closed in 1982, the head of the infants was Mrs O B WALSH. She remained with Kensington Infants which used the old Edge Hill Secondary Girls’. The Boys’ Secondary school closed in 1982. Pupils were scattered, many of them going to New Heys. The Head, Mr A H THOMAS retired, and the building was used for a time as part of Old Swan Technical College.